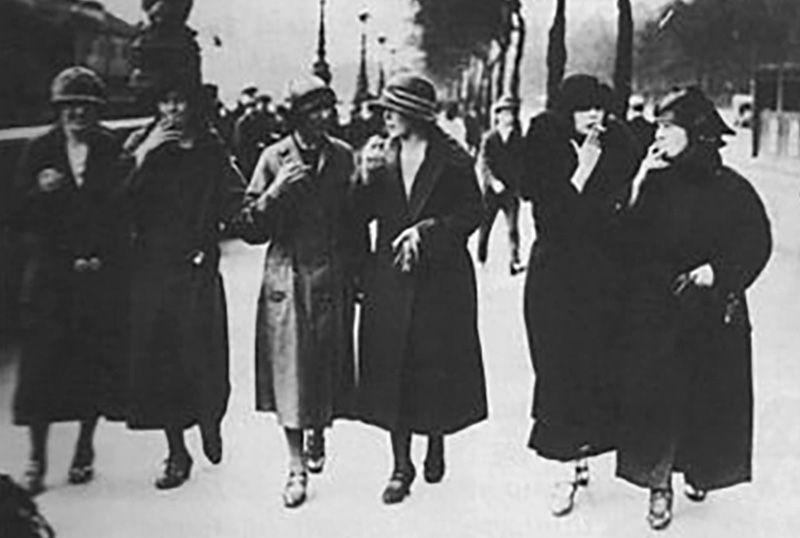 “…a gold mine right in our front yard.” That’s what American Tobacco Company president, George Washington Hill, called American women. At the time, many considered smoking inappropriate for women. (A 1908 New York City ordinance even prohibited women from smoking in public.) Tobacco execs like Hill weren’t willing to give up on 50% of the population, though.

The tobacco industry started advertising to women. They even held lectures on “the art of smoking.” In these, they taught attendees smoking skills like how to properly hold a cigarette. Meanwhile, Hill hired Edward Bernays, to help him turn women into smokers.

A brilliant propagandist, The Wilson Administration previously hired Bernays to grow support for the war. He did so by spreading the idea that U.S. efforts would bring democracy to Europe. Bernays referred to the work he did for the U.S. Government as “psychological warfare”.

After the war, Bernays coined the term public relations. It was a replacement for the word propaganda, which had a bad rap. (BTW: Bernays also wrote the book Propaganda.) Later, he used fear to persuade people that only disposable cups were sanitary. He also convinced you that bacon and eggs are the all-American breakfast.

The common ad man might have promoted a more “feminine” cigarette, by making it pink, or adding flowers. Alternatively, he might have talked about their “health benefits”. Bernays did something more audacious.

Bernays considered news stories more powerful than advertisements. So, he staged an event at the 1929 Easter Sunday Parade, in New York. Bernays paid rich debutantes to join the parade with cigarettes hidden under their clothes. He instructed them to dramatically light their cigarettes, on his signal. He then informed the press that a group of suffragettes intended to protest at the event, by lighting their “torches of freedom.”

With this stunt, Bernays reframed smoking as a means of emancipation. He linked one’s choice to smoke with her support for the women’s liberation movement. The media had a field day with the story. Even feminist Ruth Hale said: “Women! Light another torch of freedom! Fight another sex taboo!” Cigarette sales to women rose.

In promoting your business, you probably attempt a rational approach. Maybe you talk about the features or benefits of what you’re selling. Perhaps you use facts, figures, research, or testimonials to make your case. Tell me this: How often does your sensible appeal go ignored?

Persuasion can be a more effective tactic. Consider your buyer’s desires, and the power of suggestion. Entitlement: “Because you’re worth it.” Empowerment: “I want my MTV.” Permanence: “A diamond is forever.” Safety: “Nobody ever got fired for buying IBM.” Excitement: “Red Bull gives you wings.” None of these famous phrases speak to facts. For humans, though, feelings often trump facts.

I’m not praising Bernays techniques. His campaign resulted in countless illnesses and deaths, from cancer. It’s equally horrifying to consider those who subsequently exploited his methods. For example, Joseph Goebbels was a fan of Bernays’ work. He used these techniques to advance the Third Reich and slaughter millions.

I don’t propose you use Bernays’ methods. In fact, I’d rather such manipulation could be avoided altogether. Nevertheless, it’s important to recognize the way persuasion works—and how impervious emotions are to facts. (Especially in light of current events.)

OK—that’s it. I need to wrap this up and grab myself a glass of raw water.